Q. Are the test results relevant for the prescription of all medications?

The myDNA test provides useful information for the prescription of many medications used in clinical practice.


Q. What is pharmacogenomics?

Pharmacogenomics (often used interchangeably with the term pharmacogenetics, though a distinction can be made) is the science that examines the link between our genetic makeup and how we respond to medications. It encompasses the full spectrum, from laboratory studies to clinical trials and the development of practise guidelines. Pharmacogenomics improves prescribing for the individual by helping to predict how they will respond to a particular medication and dose. Ultimately, improved prescribing decision-making enhances therapeutic response, safety and health outcomes. In this way, pharmacogenomics forms an important part of the emerging paradigm of ‘personalised medicine’.

Understanding the basics of drug response requires an understanding of drug exposure (i.e. how the amount of drug at the site of action changes over time) and drug actions (i.e. how a drug produces effects through receptors, enzymes, ion channels and other targets). There are many factors that influence drug exposure and drug actions, of which an individual’s genetics form a significant part. Drug exposure can be changed by variations in the genes encoding metabolising enzymes (e.g. CYP P450 enzymes), producing either faster or slower rates of metabolism. These changes in enzyme function may change oral bioavailability or half-life which directly determine drug exposure and, ultimately, clinical effects. Most pharmacogenetic tests are for enzymes or transporters that influence drug exposure. Even though drug targets are key to drug response, we currently only test one of these (VKORC1 for warfarin), though this is likely to change in the near future.

Q. What is the myDNA test?

The myDNA test is a pathology test that identifies common variations in the genes encoding the enzymes CYP2C9, CYP2C19, CYP2D6, CYP3A5, CYP1A2, CYP3A4, VKORC1 and the drug transporter SLCO1B1. The results of the test may help predict an individual’s response to medications and therefore facilitate personalised prescribing, improving the chance of therapeutic success and reducing the risk of adverse effects.

The liver is the major site of drug metabolism and here the body converts many medications into new compounds via enzyme-mediated chemical reactions. The enzymes that catalyse these reactions are encoded by genes. Many of these genes are polymorphic – that is, different variations exist in the population – and these variations directly influence how efficiently an enzyme will function. For example, some variations result in the production of a non-functional enzyme whereas others result in metabolic speeds that far exceed the ‘normal’ rate. By testing an individual for common variations, it is possible to predict their corresponding enzyme activity and the speed at which relevant drug metabolism will occur.

The Pharmacogenomics Knowledgebase (PharmGKB)2 is funded by the National Institutes of Health (NIH) in the United States and is managed at Stanford University. PharmGKB records pharmacogenomic-based dosing guidelines from the Clinical Pharmacogenetics Implementation Consortium (CPIC), which are published in the journal Clinical Pharmacology and Therapeutics when sufficient evidence allows such recommendations. Currently, there are CPIC guidelines available for the dosing of 34 different medications which can be accessed at www.pharmgkb.org. The US Food and Drug Administration (FDA) has also published a list of over 150 drug labels that provides prescribing information based on pharmacogenomic biomarkers.3

Several other international bodies have published guidelines for drug dosing based on pharmacogenomic testing, including the Royal Dutch Pharmacist’s Association Pharmacogenetics Working Group and the Canadian Pharmacogenomics Network for Drug Safety.

Q. What is the relationship between an allele, genotype and phenotype?

The basis of pharmacogenomic testing is the prediction of an individual’s phenotype from their genotype, which can be achieved with a good degree of reliability. How strongly any pharmacogenomic result is linked to therapeutic or adverse effects with a specific drug depends on many factors (for example, whether there are alternative pathways through which the drug in question may be metabolised). That link may be stronger and weaker depending on the specific gene-drug interaction. When a substantial evidence base points to a strong link between a gene and drug response, there is likely to be clinical utility in performing the pharmacogenetic test.

Q. Which polymorphisms are included in the myDNA test?

The myDNA test identifies the polymorphisms that correspond with the following alleles: 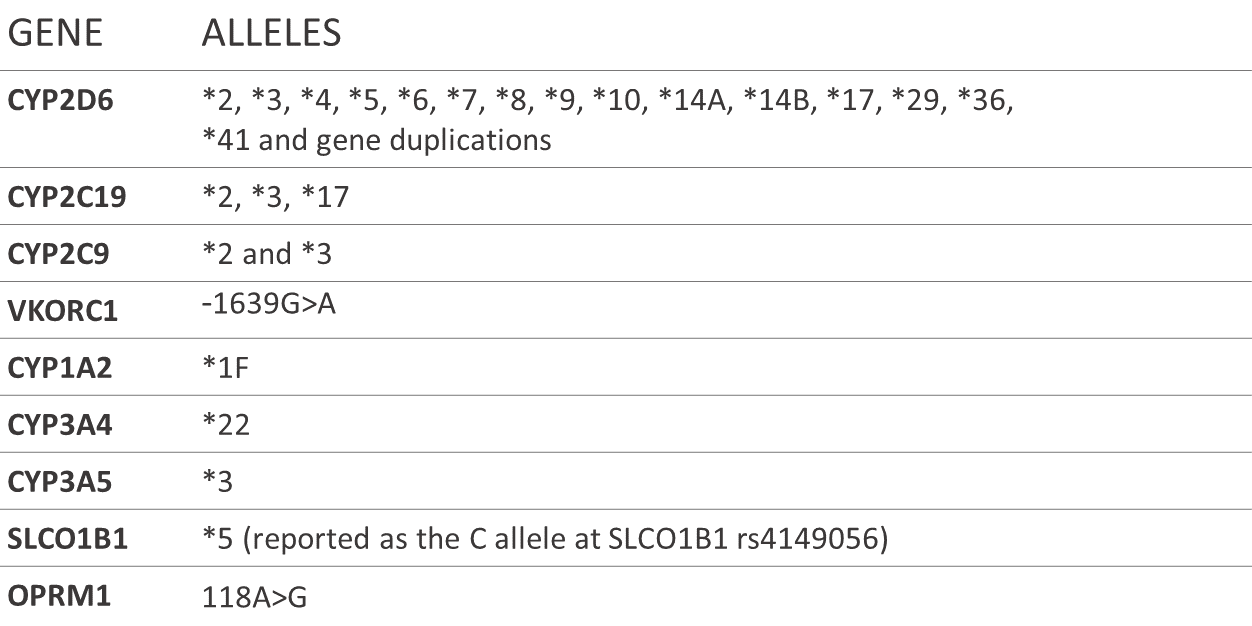 Q. How common are genetic variations in enzyme function that may affect drug response?

An analysis of a sample of 4,750 Australian patients tested by My DNA Life revealed the following frequencies:

Table: Frequency of genotype predicted phenotype in a cohort of 4,750 Australians

Significant variability exists between ethnic groups with respect to the frequency of the genotypes tested. This is important in understanding the chance of a test missing an important genotype in a particular ethnic population.

Q. How is this test different to a liver function test (LFT)?

However, LFTs provide very limited information on the ‘function’ of individual enzymes, which may be significantly abnormal in the absence of liver disease.

For example, ‘poor metabolisers’ are genetically limited to producing non-functional enzymes and this is independent of any other liver pathology.

Q. When is the test indicated?

The results of the myDNA test are useful whenever a patient is prescribed a medication that is affected by genetic variations in at least one of the following genes tested for in the myDNA test panel: CYP2C9, CYP2C19, CYP2D6, CYP3A5, CYP1A2, CYP3A4, VKORC1 and SLCO1B1. As many medications are affected by these enzymes and the transporter, the test can assist with improved, personalised prescribing both now and in the future.

Prospective testing means that the results are available at the time of prescribing and can be incorporated immediately into decisions such as medication selection and dosing. In some ways, pharmacogenomic test results could sit alongside the patient’s renal and liver function, as on-hand, highly relevant information for prescribing. Testing may also be useful for addressing specific clinical problems, including:

Q. IS THE TEST COVERED BY PRIVATE HEALTH INSURANCE?

Currently there is no reimbursement for the cost of the test by private health insurance, however patients should check with their provider.

Q. Should a test for variations in a specific gene be repeated when a new drug is prescribed?

A gene test result doesn’t change over the course of a person’s life. Therefore, testing for a specific genetic variant can be conducted once and used to guide both current and future prescriptions of medications. As new genetic tests are developed that may be important for understanding the processing of response to medications, it is possible that further testing may be warranted in the future.